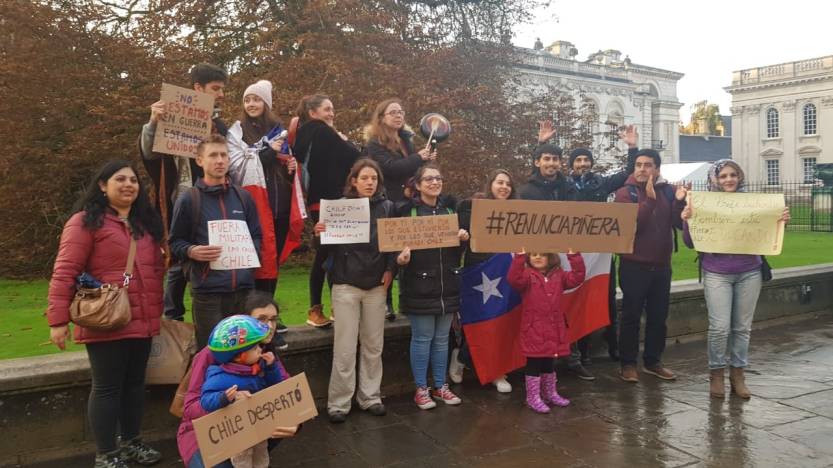 Dear fellow members and students of the Faculty of Education,

As Chilean students at the Faculty of Education, we would like to share information about the current situation in our country to raise awareness and international solidarity about this social and political crisis.

As you may know, we lived a cruel military dictatorship between 1973 and 1990. Thirty years after the end of the Dictatorship, this is the first time a state of Constitutional Exception is used by a president because of political reasons. On the 13th of October, students in Santiago started a series of strikes against a rise in public transport fares. The People in Santiago first, and then in the rest of the country, joined the strikes that began to represent a discontent much broader than the fare, and rooted in inequality as the source of discontent.

An image of an “iceberg”, where the tip is transport fares, has been used to explain all the problems that made people join the protests which include, among other reasons, a highly privatised educational, pension and health systems that does not provide minimum social rights and protection; corruption scandals among politicians, police and the military; environmental exploitation; and the need of incurring in huge debt to afford life conditions because the minimum wage is far from enough.

On Friday the 18th of October, the Government decided to repress fare evasions in Metro stations in Santiago, by using the military police. Although by then protests had the form of peaceful fare-evasion calls, the answer to repression was an escalation of social mobilisation, combining peaceful manifestations with violence, and many stations severely damaged. Looting started in the biggest retail stores as well (i.e. Walmart). As a response, the Government called a State of Emergency and since then we have curfews every night.

By October 23rd, after 6 days of protests, our Human Rights ombudsman counted 2,410 people arrested (274 of them children and teenagers), 535 people injured by the police and military forces (210 by fire guns), at least 15 deaths (5 of which are officially recognised as action by the police and military), plus documented torture and sexual misconduct against female protesters.

Yet, people on the Streets of all Chilean cities have continued mobilising, and yesterday protests across the country reached a peak. You can get an idea of the scale here https://www.youtube.com/watch?v=EUT4bPj4n9E

As you can imagine, we Chileans are living difficult times. However, it is also a moment of hope and coming together to work towards the call for a new social contract. From Cambridge, we are sending our support to our families, friends and all the Chilean people fighting for a more equal country. We firmly condemn the violence and abuses of the State’s forces and urge the Government to end the State of Emergency.

This week we have been demonstrating in solidarity in the city centre and next Saturday 26th at 15.00, we will be gathering at Market Place, it would be really meaningful for us if you can join us. Additionally, academics around the world are signing a letter of support for the Chilean people. If you want to show your solidarity, we invite you to sign the letter, here is the link.

Thank you for taking the time to read our statement. As Víctor Jara would be singing in these sad moments, we demand our right to live in peace ¡el derecho de vivir en paz!

Chilean students at the Faculty of Education